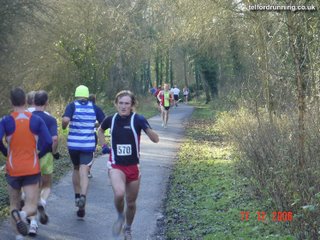 Today I made my 'road' race debut. I have run a few road relays at various distances, and I ran a couple of fun races when I was a junior, but I have never run a serious road race at a 'proper' distance until today. I took part in the Telford 10km, which was run around Telford Town Park. 2 laps of the same course, it was all on surfaced paths with one small climb on each lap. At the far end of each lap, runners had to turn around a post and continue in the direction they had just come from - it wasn't so nice to have to basically stop running and then get back up to maximum pace again, that was probably the hardest bit.
I did the race partly out of curiosity and partly out of having a time that I can compare with over the next few years to guage my shape. I have to say that aerobically it was one of the hardest workouts I have ever done. My legs felt fine but my lungs were burning from about 2km. I haven't done any specific training for this race, and I didn't rest up at all during the week (apart from a rest day yesterday - my first day without any exercise for about 3 weeks), but I did try my hardest. Having no idea of how to run the distance, my goal was to run a steady pace and take splits every mile (for some reason the course had mile and not km markers). That lasted all of 5 minutes though as I went off way too fast at the start gun. My first mile was more than 20 seconds quicker than any of the others, and on the second lap what seemed like a small bank the first time turned into a huge climb (all of 10 metres!).
I went through 5km in 16.06, 5 miles in 26.31 and 10km in 33.08 (almost 4 minutes down on the winner who ran 29.18). While I have nothing to compare it against, it felt like the first 5 km was pretty fast and the second was horribly slow. I am a bit disappointed having got so close to 33 minutes not to get under, and I was overtaken and left for dead at about 7km by a guy who looked worryingly like a veteran at least twice my age and possibly quite a bit more.
Still, it's a benchmark for me to work on, and I intend to knock about a minute off my time and get close to 32 minutes by next summer.
Results will be up here

Incidentally, according to this website, that puts me around the 400 mark in 10km road runners this year in Britain, and 7th best woman :)

Ran a fell race on sunday, felt pretty good (but not on Monday). Was nowhere near winning the race, but had a good battle for 2nd/3rd. Feel inspired to do a few more fell races in the future.
Results here

Been doing a lot of coaching and mapping the last few weeks. Organised a schools festival for almost a hundred kids which went really well, and some of the kids I coach won medals at the British Schools Champs.

OD came a disappointing 2nd at the Yvette Baker Trophy (national junior club competition). We were 2nd last year as well, and after our victory in the CompassSport Cup (national club competition over all ages) our confidence was very high.

Winter training has been going well, training harder than I have ever trained before. Playing a lot of badminton and doing a lot of running. Doing a 10km this sunday which should be interesting as I have never done one on the road before.
Posted by gg at 13.12.06 No comments:

My company has a new website at www.ggmaps.co.uk
Posted by gg at 5.12.06 No comments:

England lose to Scotland in the Senior Home International (again)

I was part of the England team that was thrashed by Scotland in our own back garden this weekend. The annual Senior Home International (teams of M/W 20 and 21s) varies in importance for athletes from the pinnacle of the year for some to 'I can't be bothered' for others. This means that the teams are never the strongest from any country, but it is often the country that can persuade the most top runners to take part that wins (England or Scotland tend to dominate having most of the top elite runners). Unfortunately, in the last few years, that has been Scotland, and despite (or maybe because of) the competition being held in the centre of orienteering in England, near Sheffield, Scotland won both the relays and the individual competitions.
I love representing England and make the effort to whenever I can, even though we have to pay for ourselves, wear a very out of date o top and take the humiliation of losing to Scotland occasionally. 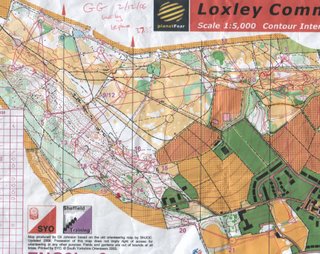 Saturday was the relay competition. It is structured so that there are 3 teams from each nation, with a 20 and 21s in each team. I was in a team with Andy Lewellyn and Duncan Archer, and we won by quite a large margin. After 2 legs it was very close and I started with Oleg Chepelin (Scotland 1st team), but Oleg had a poor run and I beat him comfortably. We both messed up really badly at the first control, but after that I ran a fairly controlled race, not taking any risks and if anything I was overcautious. This was probably a good thing as the wood was very detailed - the map was 1:5000 and it was very easy to make a big mistake (which many runners did). Scotland dominated the womens race and won overall though. 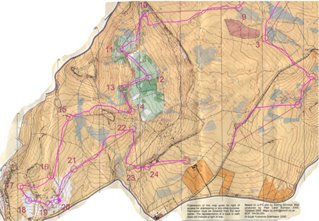 Today was the individual with 4 to count from 21s, and 2 from 20s. I was off early and quickly passed most of the runners starting before me. I had a pretty good run and I was running strongly through the deep heather and marshes which made me feel like my winter training is working. I did make a few mistakes though, with small misses at 6, 10, 16, 22 and 23, and a big mistake at control 20. I couldn't understand the vegetation or the contours in that area at all. The last few controls I was starting to feel tired, and without the mistake at 20 I would have been very happy with my run. I ended up 2nd, about a minute behind Al Buckley (England). Scotland annihilated us, especially in the W21 and M20. The M21s were about even and our W20s were best. 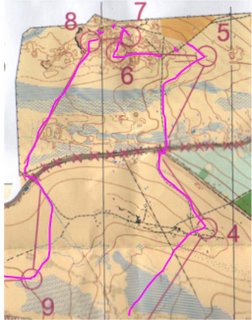 Considering I haven't really done any orienteering since the World Cups in France, I was pretty content with my weekend, just disappointed about the team results.
I will put up some pictures sometime and a link to the results when they are up, but I guess they will be here.