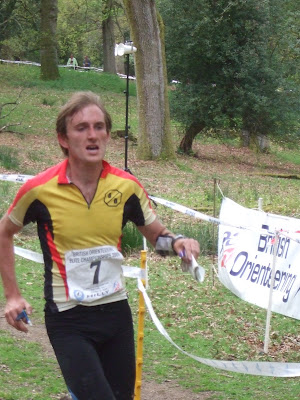 3 British Champs silvers in 8 days. Long, sprint and middle. Frustrating. Looking positively, it is a good indicator that I am running well and performing in some important competitions, but I also had the chance to win all 3, and threw them all away with small mistakes. In all 3 the margins were small, and I will try and improve before the international season begins.
Maps u
I have been selected for the Nordics team
Sprints results here, routegadget here for qual and here for final - cool area and good courses
Middle results here, routegadget here - cool area and cool course
Posted by gg at 24.5.09 1 comment:

Sunday was the British Long Distance Champs in the Forest of Dean in South West England. I was confident of a good result, and I had prepared well for the race. Unfortunately I didn't understand the map from the start, and I missed the first and second controls, so I was already 2.30 behind after 2 short legs. I then ran as hard as I could and really well for most of the course, and I was in the lead for the first time at the 17th control after 50 minutes. I then lost 1 minute on each of the 19th and 21st controls, again not understanding the mapping style in that area. I finished the race really strongly, and although on the loop after the spectator control I took almost a minute on Oli, it wasn't quite enough and he beat me by 13 seconds. Frustrating!
He also made a lot of mistakes, and it was amazing how close it ended, but nobody went round the course cleanly - it was that sort of area/map.
Another silver! Getting to be too much of a habit these days. But congrats to Oli. Middle and Sprint champs this weekend for revenge.

Map on Routegadget, with my route for part 1
Map of part 2, route when it lets me