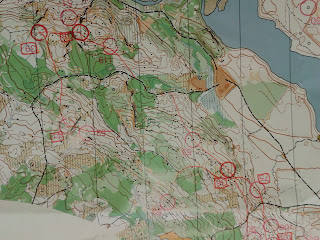 It was always going to be tough to match winning Smålandskavlen last year, but we came pretty close, finishing second to the mighty Kalevan Rasti. I ran the second leg, my first night race for a while, and I did a decent race, pulling SNO up to 2nd place overnight. I had company for a lot of the race, mostly from Jonas Gvildys and Thomas Carlsson, and in the end Topi Anjala. We quite often had different gaffles, but always came back together. Jonas had the fastest leg time, and I was second.
The terrain was tough, not unlike some Scottish areas, and hilly and stony. Nice way to finish a successful year for SNO, although it would be nice to start turning the top 5s, top 3s and top 2s into wins!

So it has been an interesting couple of months. Firstly, I am now Swedish Champion! Rehns BK were disqualified from the Swedish Relay Championships, elevating SNO to the gold medal. You can read about the disqualification here and see the updated results here. I don't really have anything to say about the disqualification other than that rules are rules, even if they are stupid, and that I am happy to be the champion!

Since SM relay, I went to Berlin to watch my girlfriend run in the marathon, and I went to Switzerland for a WOC 2012 training camp followed by the World Cup final. Unfortunately I strained my calf muscle training in Berlin, and then continued to run on it during the training camp, and the tough racing at the WC final was too much for it, so I could hardly run since then, and in fact I have had almost 3 weeks now without any running. I also had some stomach problems at the WC final weekend, meaning that I had pretty poor results, but as always they were some excellent races.

I have now been selected for the GB performance group for 2012, and I am about to start my winter training in build up to the 2012 Championships. I am always quite motivated at this time of year to start base training, and put into practise all the ideas I have been noting down during the year.

It is also time to look back at what I have achieved (or not achieved) during 2011.

Joining SNO, getting a really nice job and place to live in Södertälje with my beautiful girlfriend!

Major foot injury in January, and consequent knee problems for much of the spring
I missed many Swedish races, British long distance and student championships due to injury
Poor World Cups including NORT and WC final in Switzerland
Posted by gg at 24.10.11 1 comment: