In the dark at Tiomila 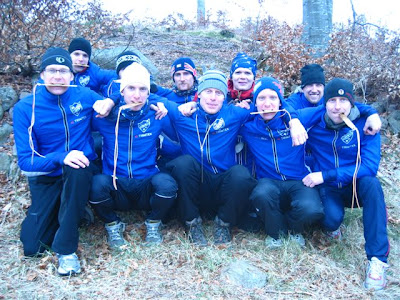 After 7manna, I stayed in Skåne until Tiomila with some Italian and Swiss runners. We spent some time close to Tiomila terrain, taking part in Elitserien and a night competition during the week, but also some time in åhus close to Kristianstad on the east coast. It was the first time I had been there, and it was a nice contrast from some of the rough Skånsk forests to run in the perfect sand dunes there.
But soon enough it was time to come back to Perstorp for the big one. Confidence was high in the Lidingö camp, and despite a slight scare when Emil had a small cold in the build up, all the team were in good form to fight for a top place. I ran the 7th leg, and before me the team had all run perfectly. We had been close to the top all night, and I started in 9th place, 3 minutes down on the leaders, but Fredrik Löwegren who ran the 6th passed on the info at changeover that he had had longer forkings so mine would be shorter. I started just behind Södertälje and I had his back to the first controls, but then as I took a different route choice to the 3rd, I was running along in the forest when my lamp cut out and I was in the dark. Not good. After some playing around with the lamp, I continued on my reserve lamp, a really small LED lamp powered by a single AAA battery. Not ideal, but I knew that I had no choice but to get round the course and lose as little time as possible. I ran 10 controls and half the race like that, and luckily I was able to change lamps running through the arena, so I finished the race with a strong lamp and very stressed.
I lost around 8 minutes to the leaders, and a little more on the best on the leg, but unbelievably I actually gained 1 place!
Jonn Are and Klaus ran really well after me to set Emil out in 6th place, and despite not having a great race, he was only passed by 2 world champions near the end to give the team a pretty respectable 8th place. Bittersweet - decent result, but with so much time lost on my leg, who know what could have happened if Emil had had the chance to fight for a medal. 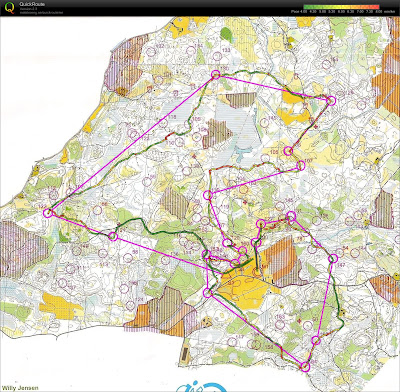 In other news -
I have been selected for the GB team to travel to the World Games in July, and I hit the top spot in the Great Britain ranking list for the first time!
Posted by gg at 22.4.09 1 comment:

So last week Elitserien, the premier elite series in Sweden, kicked off in Skåne. First up was a middle distance with a chasing start based on a qualification race the day before. I really like the concept, but I don't feel this race worked very well in the circumstances. There were 260 guys entered, running a straight qualification for 40 places, which meant that while qualifying should be no problem for the top guys, it was obvious that the time differences were always going to be really small. I was disappointed with my qualification race, making lots of small mistakes, and I ended up 26th, only 2.37 behind, but 40 guys finished in 3.20! That meant the chase was really manic, and around me people were started nearly every second. Unfortunately the chase developed very much into a running race. Maybe at the front runners were trying different routes to win, but around me, everybody was just running in a line on the same route choice as the man ahead, and just trying to run past people. I decided early that while this might be the best way to get a result, that any result would really be meaningless in the context of my season. Therefore as early as the first control I tried to do my own thing. I took different route choices to the pack on the 1st (bad, lost time), 5th (bad, lost time), 12th (very good, took quite a lot of places) and 19th (very bad, the 'dry white strip' turned out to be knee deep marsh, so I lost a lot of time, and maybe 10-12 places). Finishing the race I felt very frustrated, my tactics were not conducive to a good result, and while I ran a very good race technically, I did not get the result I wanted. 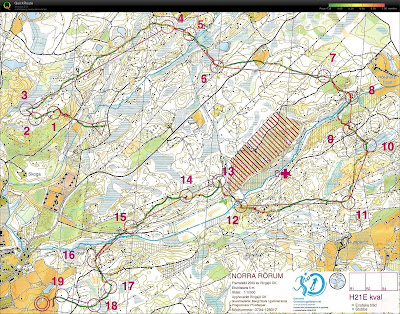 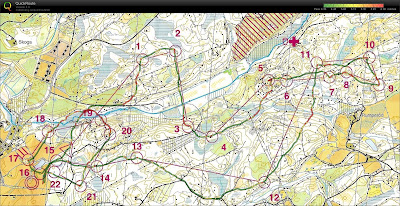 Sprint race
Later in the week was the second race of Elitserien, and after the middle distance, I was keen to get a good performance and result under my belt before Tiomila. This race was a sprint race in Helsingborg, and a quick look at the start list showed that this was more than just a normal Elitserien race - many top runners from around Europe were in town for Tiomila, and using this as a warm up. I was really pumped up for this race, more so than any other race this year I would say, and I really put a lot of effort in.
I started well, taking a good, but safe route to the first, and I took the 2nd well also. I made a poor decision not to run through the field to the 3rd, and lost a few seconds there, but the 4th and 5th were perfect. To the 6th control I never even saw the route out by the sea, and at the end I made a poor decision to run down through a really rough area rather than run a little further and through the white. I also lost around 7-8 seconds here. But most importantly I caught sight of my minute man, Mats Haldin. He was still a long way in front, but I had certainly gained a lot of time on him. I ran through the spectator control and the speaker said I was around 15-20 seconds behind Wingstedt, and I really tried to push the pace on the long flat section after that. I took a good route to the 9th, and I could see Mats a little more than a control ahead in the forest area - close enough for me to really drive, but not enough to be helpful finding the controls. The extra motivation obviously worked as I won the splits to the 10th, 11th and 12th controls. I wasn't sure about the route choice to the 14th, but I could see Mats about 200m ahead on the road, so I used that information to confirm my route choice decision. He was much to far ahead to catch, but I ran strongly through the last few controls - I knew I had run really well and gave everything to the line, and crossed in 3rd place only 12 seconds behind Wingstedt! My last loop had been really strong, taking 10 places, and after I finished only Kramov came in in a faster time, to give me a 4th place, and my best ever result in Elitserien.
I was really pleased to have only lost 18 seconds to the World Champion, and most of that on the 2 small route choice errors in the beginning. That was the feeling I wanted to get before Tiomila, a really good indicator that my training has been going as well as I thought.
Results 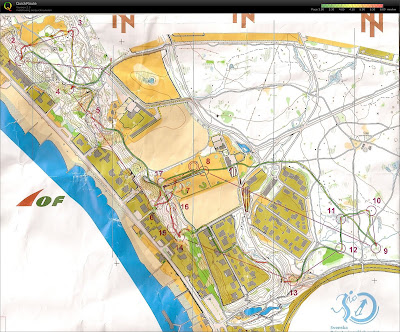 Lidingö's preparation for Tiomila has started to go really well, with podium places in the last two relays in Måsen and Rånäs, and now we went one step better and won 7manna, only a week before the big one. Many of the teams we were racing were not at full strength, but we were missing a couple of runners too, and although not everyone performed as well as they would hope to next week, we managed to take victory by about 3 minutes.
I ran the 3rd leg (the longest night leg), and I was satisfied with my race, starting in a pack from 2-10th around 4 minutes behind the leaders, and I came in in 3rd place, with 2nd place, only 1.10 behind the leaders. The forest was very scrappy, with lots of fallen trees, and it was often hard to run in a straight line. I lost little bits of time here and there but I didn't make any big mistakes more than 20 seconds. I ran most of the race with Christian Christiansen from Göteborg.
The boys on the day legs ran well and got away from the others to leave us with a comfortable victory - and our girls won too! 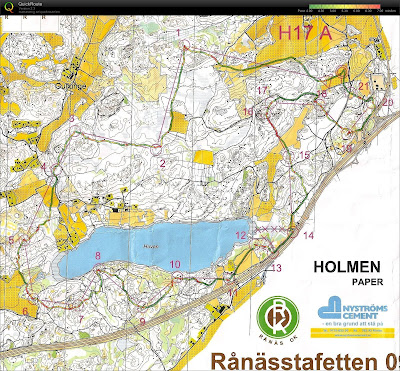 Nice 5 man relay in Upplands. Lidingö had a strong team, but we had no chance against the impressive OK Linné team, who finished a massive 10 minutes in front of us! We were 3rd though, not far behind a pretty good Kalevan Rasti team.
My race was ok, but not as good as it should have been. I ran the 2nd leg, went out in 9th, at the 4th control I had run to the lead, but on the second half of the race I was really scrappy - I never lost more than 25 seconds on any control, but I lost 10-20 seconds a lot. Came back in 3rd, around 2 minutes behind the leader, and was about 1 minute down on the best time on my gaffle, but I would have liked to have been 2 minutes quicker maybe.
Results and splits
This week in 7manna and then Elitserien down south, then some preparation before Tiomila. Time to do some night training :)
Posted by gg at 6.4.09 No comments: 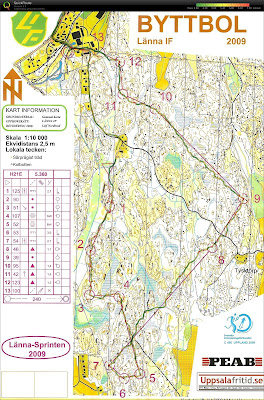 Ran a nice short/middle distance today up near Uppsala. Was really happy with my race both technically and physically. Finished second, 40 seconds behind Jan Troeng.
I love these smaller elite races, perfect technical training with good competition, good prizes and could even sunbathe!
Results and splits
Posted by gg at 4.4.09 No comments: