Race The Castles is a week-long festival of orienteering in Scotland this October. Perfect for people wanting to prepare for World Championships in Scotland, or just enjoy some high class orienteering.

The week kicks off with races and a ceilidh in Edinburgh and Stirling, then there is free training during the week in Deeside, followed by the JOK Chasing Sprint, a classic race at Balmoral Castle, and a closing event in the sand dunes of Forvie.

As part of Park World Tour we will be inviting a number of top international runners to Edinburgh and Stirling. This is being handled by Graham Gristwood, and will cover free entry and possibly some contribution to travel and accommodation. If you are a National Elite Champion or other top-20 ranked athlete and would like to be invited, please contact grahamgristwood@gmail.com

The Edinburgh/Stirling weekend features the Inaugural UK Senior Home International Sprint. The SHI selectors for England, Ireland, Scotland and Wales will nominate teams of 3 men and women each. Entries will be refunded by RaceTheCastles.

The Balmoral/Forvie weekend features the UK Senior Home International (SHI) contested on elite and relay courses. Selections for this event will be done by the respective nations.
To allow SHI runners to compete in the WRE, the start list for the SHI will be ordered according to WRE rules.

National Teams attending the WOC training camp are invited to participate in the relay on Forvie. We encourage other elite athletes to form mixed-nation teams.
Posted by Unknown at 12.5.14 No comments:

Tiomila is generally the biggest target of the year for any Swedish club, and IFK Mora (the club I run for and coach) is no exception. The men were 8th last year and with a stronger team this year the dream was to be top 5. We had very good preparations, and no problems with sickness or injury so we were able to select our strongest possible team.

Things went well through the night, with runner after runner doing a really good job to keep us in contention. We were in the lead group after 3rd and 6th legs (the straight legs) which was crucial, and then as things started to split up on 7th leg, Johan Lindberg did a really good job to start me in 5th place. I ran well (tracking here) - only losing time to Thierry - to change over 4th (just behind 3rd and quite close to 2nd still) after 8 legs. Vojtech and Roman then finished the job keeping the 4th place to the finish - the best result for IFK Mora since the 60s! This was the result of 15-20 guys training hard all year, and 10 good performances from those selected to be in the first team. 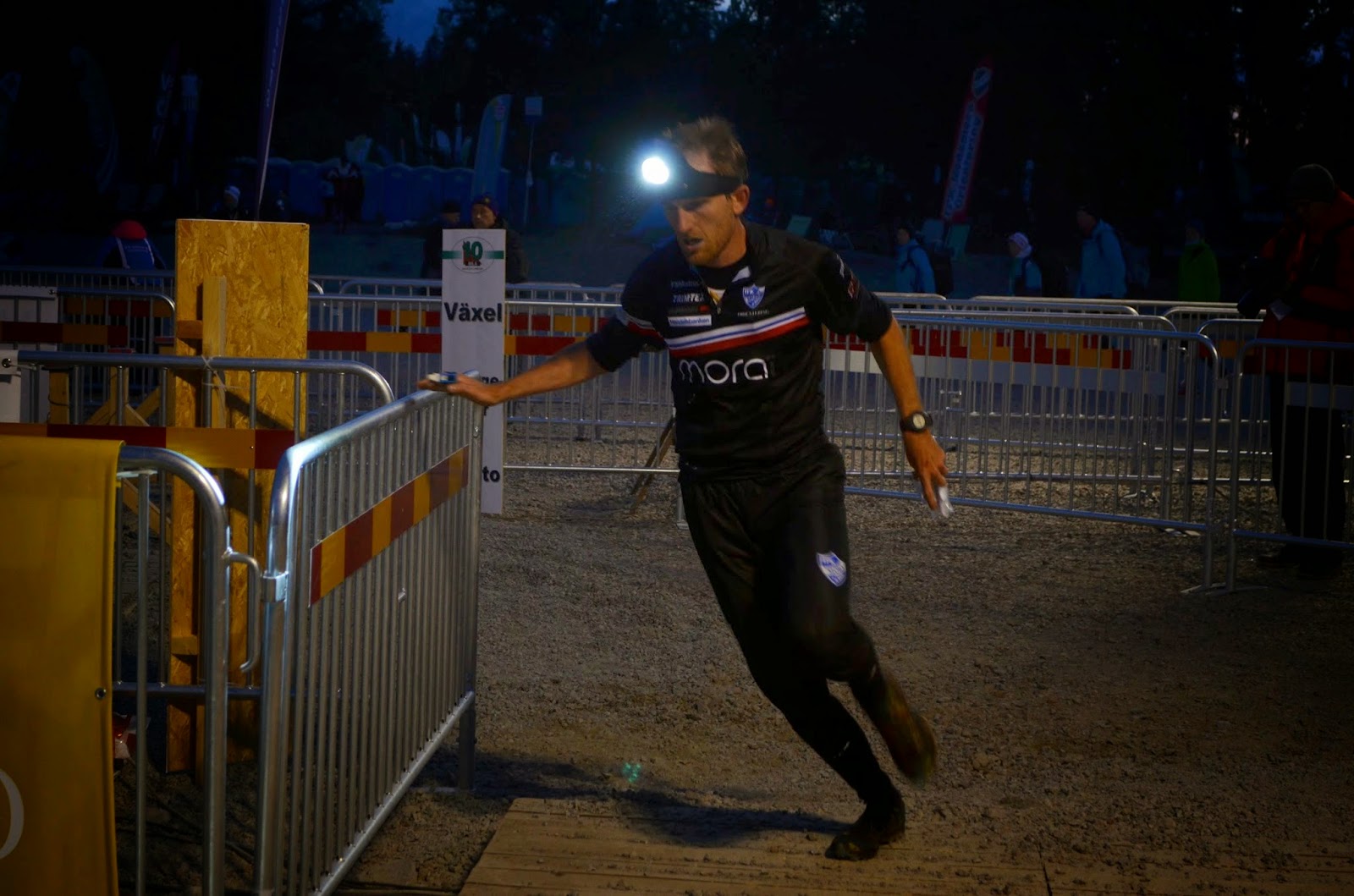 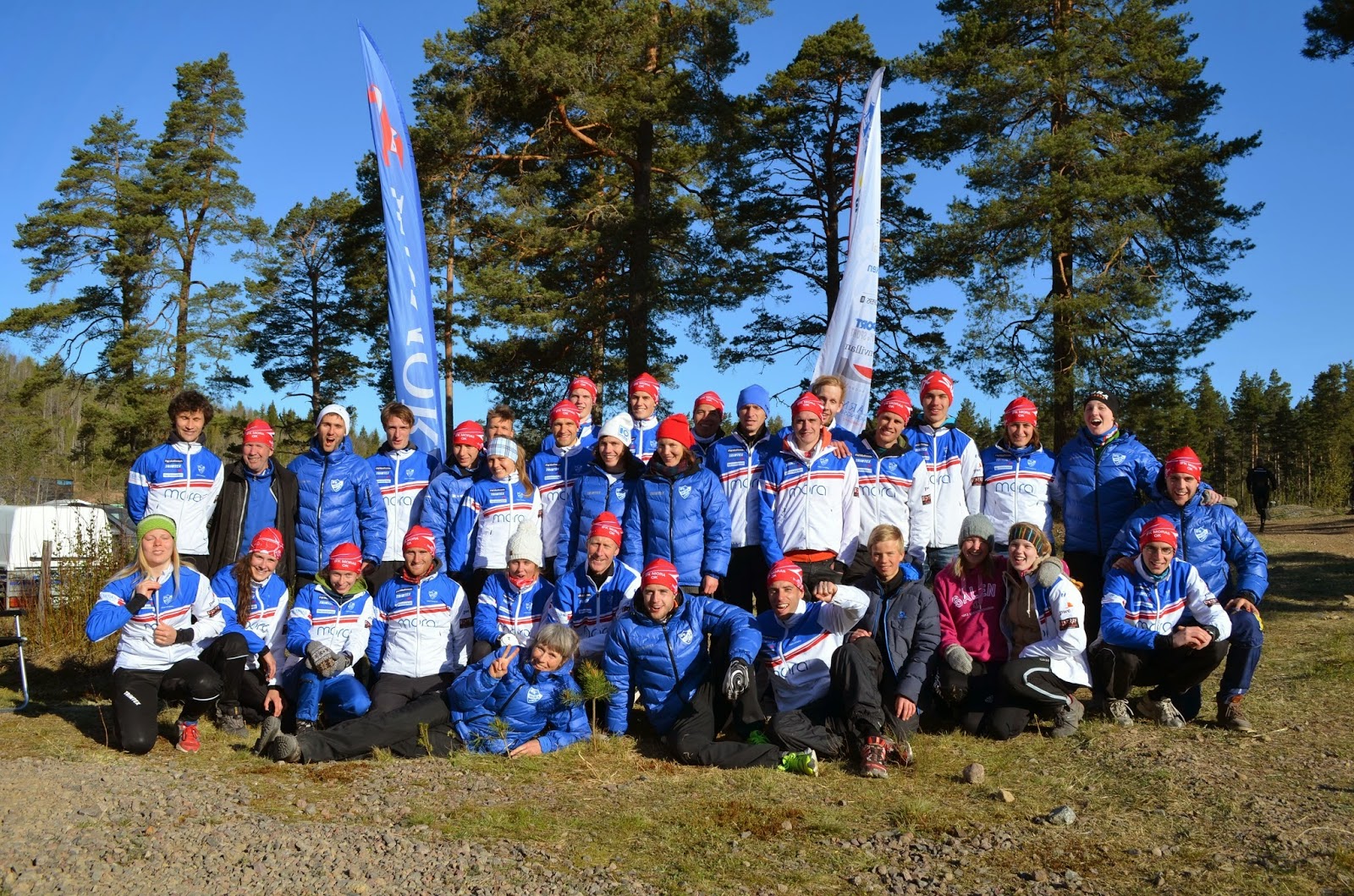 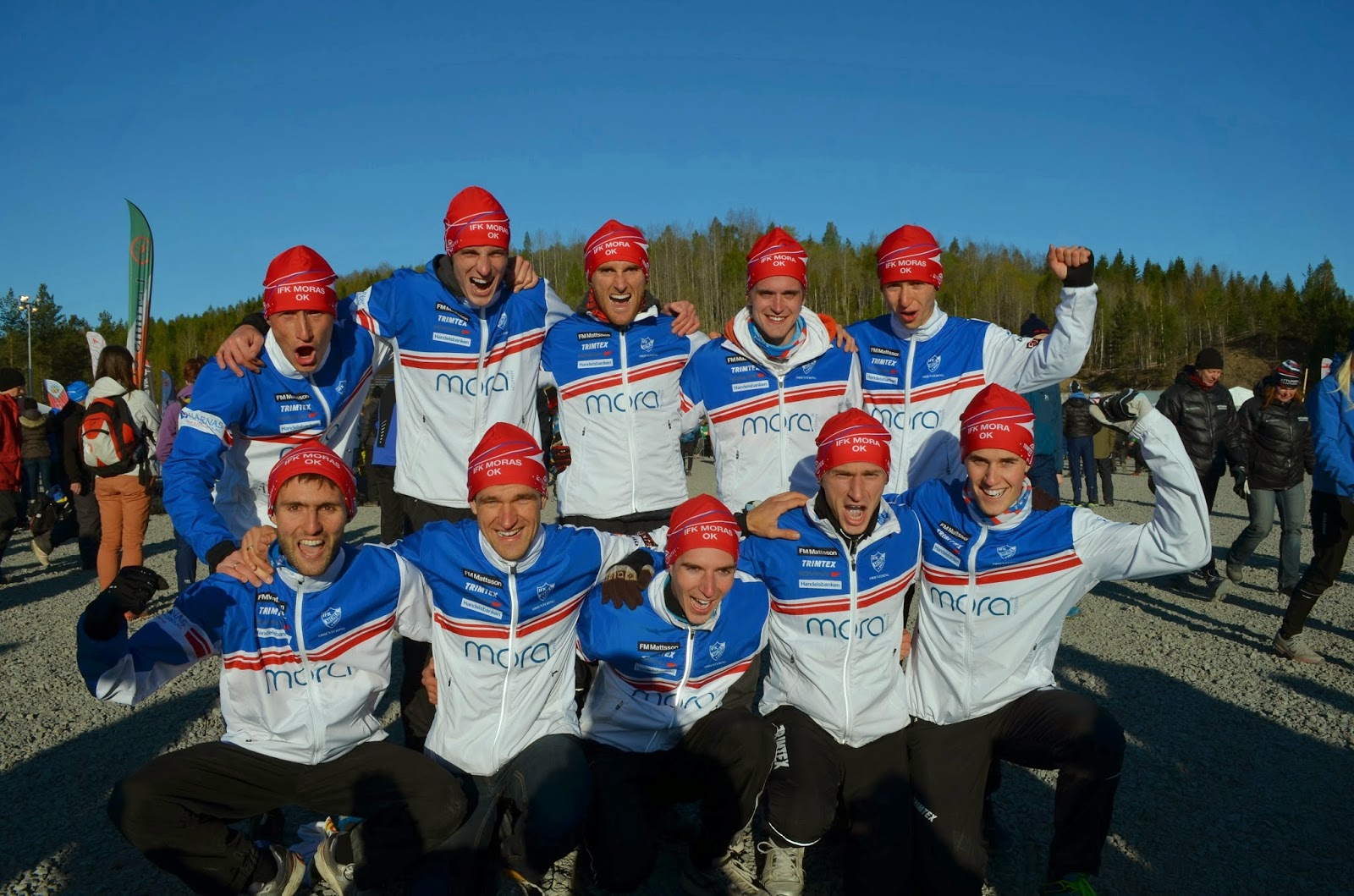 I am now staying in Mora for a few more weeks before going back to the UK for some competitions in the end of May - Harvester Relay, then Scottish Championships, the British Long and Relay Championships.

I am happy to announce that as well as the continued support of inov-8 and Hilly, I also have renewed my support deal from Cherry Active and have a new sponsor - Ekens Sportprodukter.

Ekens Sportprodukter produces the best magnifiers (lupp) for orienteering that I have tried, and I now carry one with me on every race and every training session. It is invaluable as a tool to use in very detailed terrain when you need a better picture of the map and I highly recommend them.
Posted by Unknown at 7.5.14 No comments: 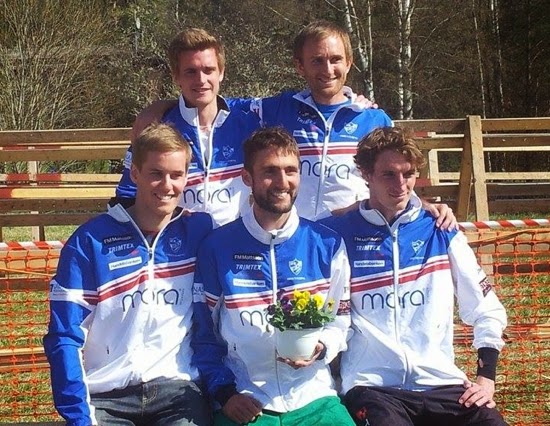 European Championships was an interesting experience this year - controls in the wrong places, poor maps in the qualification races, horrible terrain with man-eating bushes in the long qualification, course maps leaked before the long finals and so on. It was also a lot of fun! Mostly this was laughing about what could go wrong next, but I did enjoy all four races that I ran.

Middle qualification went well, and apart from the inexplicable map at number 5, a poor route choice to 12 and getting a bit stuck to 13, and I finished 8th in my heat, about 1 1/2 mins behind.
Long qualification was also fine, except for getting stuck in bushes on the way to 11 for 2 minutes! Again 8th in my heat, 2:40 behind. 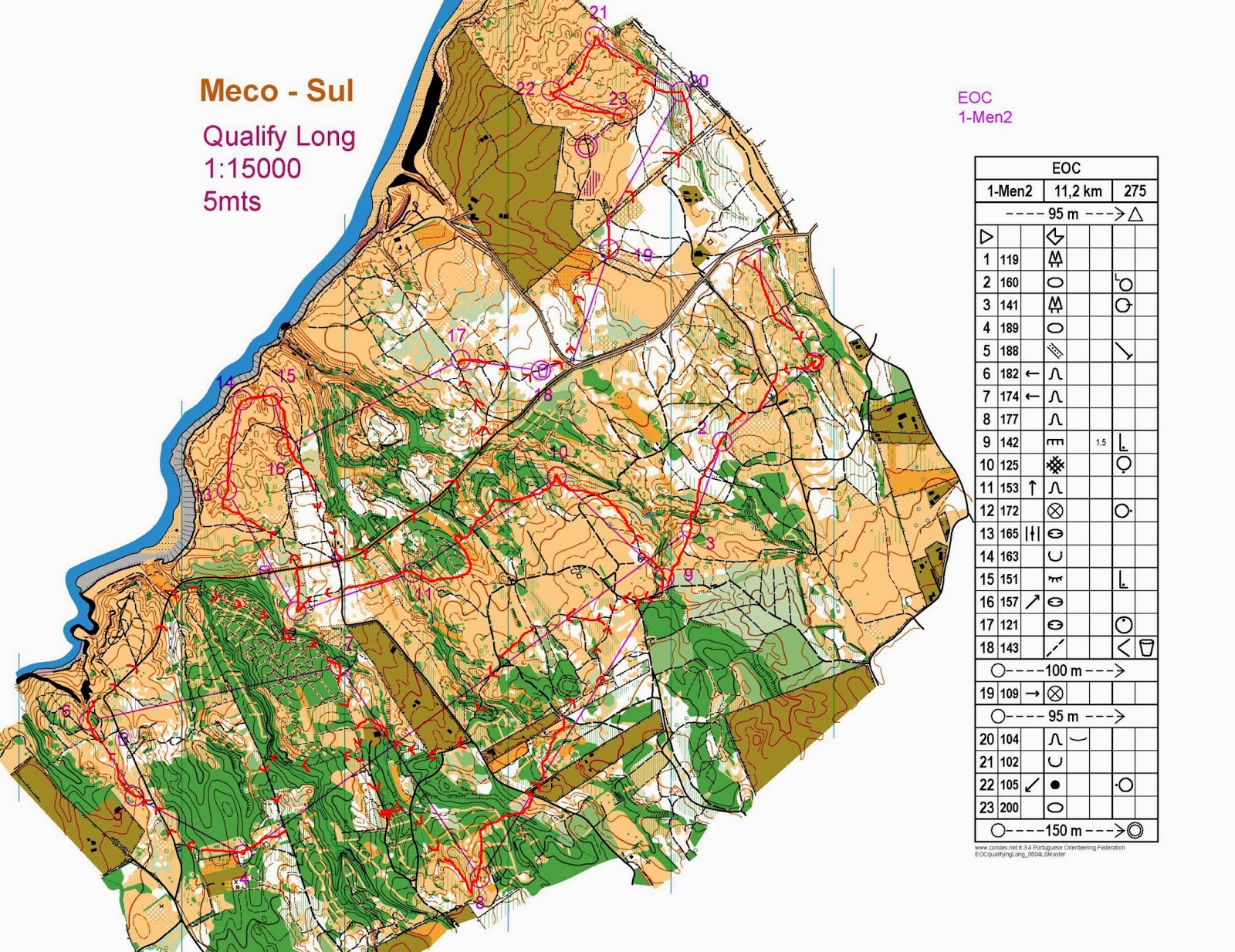 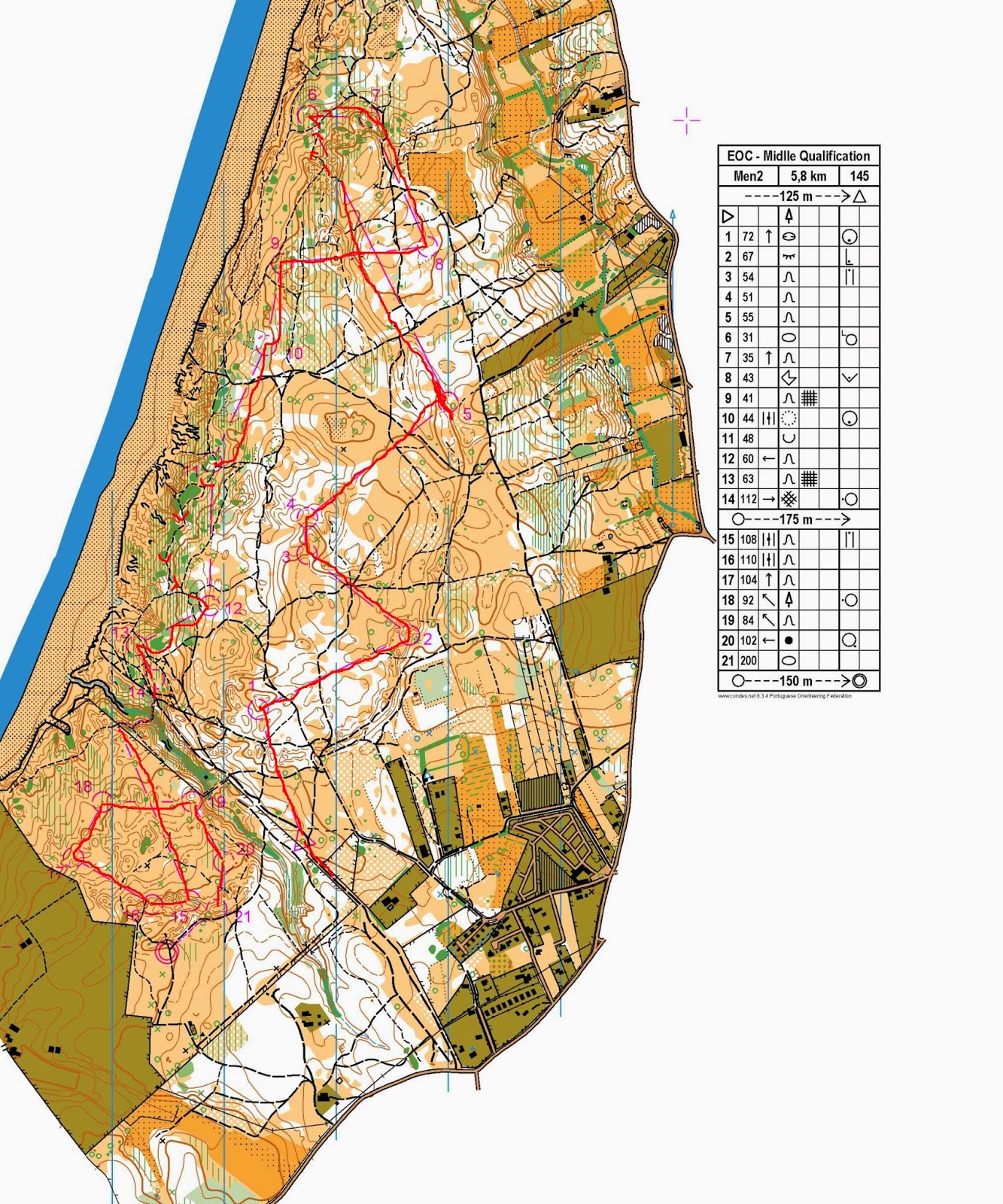 The middle final was not a good performance for me. I lost time on 4 of the first 5 controls, and in this terrain that is game over. I finished 28th, 3:11 behind having lost about 1:30 in the beginning. Tracking here (Although I was not tracked).

The long final was much more successful. I produced a good performance physically and technically, and finished 16th, 4:41 behind the leader. This is my second best ever long distance result, after 9th in WOC 2009. Tracking here and 2d rerun here.

The relay was the day after the long, and with 4 races in 6 days in my legs, I had to drop out of the GB team as I felt I had nothing in my legs to give. It was disappointing for me, but also partially expected. The boys did a very good job to come 5th without me!

I flew directly to Sweden to a Tiomila camp with my club, IFK Mora, from EOC. The non-EOC runners had a tough weekend with a lot of training/racing, and the EOC runners did what they felt they could after a tough championships. I just did some easy training before the main focus of the weekend - Kolmårdskavlen. A 5 man relay with almost all of the best Swedish clubs (and some overseas clubs too). We chose a very strong team to try and win the race - and that is exactly what we did!

Andreas Holmberg and Johan Lindberg ran really well on legs 1 and 2 to send me out in 3rd, just under 2 minutes behind. I had a very good run (and fastest leg time) to pull us into the lead on 3rd leg. Zsolt Lenkei (despite twisting his ankle on 1st control) ran well to change over 4th, just under 2 minutes behind, and then Vojtech Kral, our Czech superstar (fresh from EOC relay silver medal) passed the first 3 teams to win the relay for us! I am told that IFK Mora hasn't won many big senior relay competitions - with only a Rånässtafetten victory in the past decade or so - so hopefully this marks the start of a successful new era for the club.

Some nice articles about the victory here and here.
Posted by Unknown at 7.5.14 3 comments: