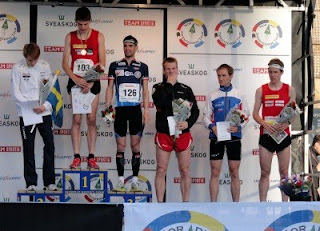 It had been a long time coming, but I finally managed to take my first individual top 6 in a senior international race in Stockholm on Tuesday. The race was a new concept - a round based knock-out sprint with a straight qualification race and the quarter, semi and final races through the day.
My goal for the day was to qualify for the semi-final so that I had a chance to run in the streets of Gamla Stan (old town Stockholm). I ran a good qualification race with just one bad route choice to finish 7th. Then I managed to win my quarter-final in front of Hubmann, Novikov, Rost, Johansson and Kerschbaumer. In the beginning I just stayed behind the leader, and with 3 controls to go I moved to the front and ran flat out to the finish.
After a couple of hours rest it was time for the semi-final - up against Khramov, Muller, Weltzein, Haldin and Hubmann again! I felt I had nothing to lose and nobody would expect me to go through, and I had the same tactic as for the QF. I just ran behind Daniel and then ran like hell from the last control! I managed to pass Hubmann on the finish to win my SF as well!
Then it was really strange to have so much adrenaline and lactic acid, with only 45 minutes before the final. I was much more relaxed (maybe too relaxed) having surpassed my goals for the day, and already from the first metres of the final I was not feeling so strong - I think also Fabian was setting the fastest speed of the day, and I had some problems to follow him. The race was really cool, but I could not rely on my speed to pass the other runners, and after half the race I realised I needed to try some different route choices to have a chance to get a medal. I did this, but every time I reappeared in 5th place behind the other runners, and I was just run out of it at the end by some really strong athletes!
It feels slightly strange to have beaten the world's greatest orienteer 3 times in one day and not get a medal, but I am really satisfied with my performance, I gave 100% in every race and I had 4 almost perfect races. I really like the concept and I think it suits me well, especially in the urban environment, and I look forward to more competitions like it in the future.
My 5th place gives me lot of confidence for later in the year.
Photograph from British Orienteering.
Posted by gg at 24.6.10

Booosch! Some serious ass whooping going on there ;-)

Great result GG- you deserve it