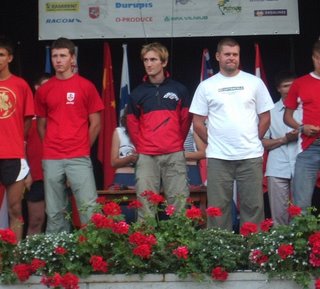 I have just spent the last 8 days in Lithuania where apparently they have just had an all time record sunny spell (which was nice). I watched all the JWOC races, did all the spectator races, spent pretty much all week in the sun and had a really nice, if tiring, week with some of my friends. I was also a supporter for the GB JWOC team, especially Tess Hill who I coach.
Below is a short report of my week, including my maps from the races and some photos.

Well the week started with a bang, literally. 5 of us flew into Kaunas airport about 1 hour before the start of the sprint final, so we jumped in a cab to get us to Druskininkai. The cab driver seemed to sense our urgency and proceeded to hurtle at breakneck speeds down small country roads, frequently getting air over bumps even with 6 people and luggage in the car. He did eventually slow down, but only after a particularly large bump and short flight through the air after which a large portion of the exhaust pipe fell off. After that he was slightly more reserved and we made it to the arena having only missed the first few girls.
The main thing I can say about the sprint race is that I wish there had been one when I was a junior and how I really wanted to run standing there watching all afternoon.
After the race we went to find our caravans and explore JWOC town. I was acting as a reporter for planetFear during the week (who I work for as an orienteering correspondent - see www.planetfear.com), so I had to make daily trips to the press centre to send back the news and photos. 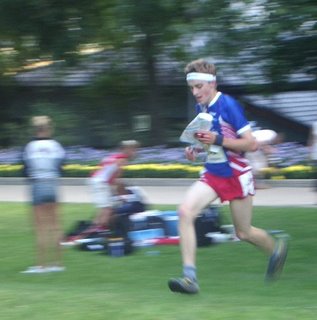 The next day was the first of several really long days in the sun followed by an evening competition for the spectators. Some days we were watching JWOC at 9.15 or 9.30, and not racing ourselves until nearly 5pm. Day 1 for us was a middle race on the JWOC classic area. After 2 days of watching, I was really ready to get racing myself. My over eagerness showed a little and I was a little rusty over the first few controls. I got really into the later part of the course though and was a little disappointed with 7th place, although less than 2 minutes behind. The forest was a real mix of beautiful white forest and bushy areas which were fine to run through, but with really reduced visibility. The contour detail was really interesting. Detailed but not complex. 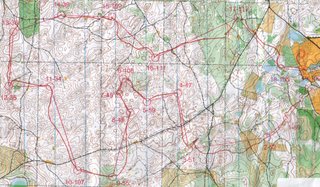 The next day was a rest day for the JWOC competitors, but for us it was back to the classic area for our own classic race (and World Ranking Event).
Again I had mixed feelings after the race. I knew after day 1 that I was running really well, if only I could put a good race together navigationally I would be right up there. I was starting 6 minutes before Simonas Krepsta and the plan was not to see him. It worked until about 80% of the way round when I blew more than 4 minutes in 2 controls and I saw him pass me. I thought he was away but he then missed the next control and we ran for a little together. At the end I took a dodgy route and he finished about 20 seconds ahead of me.
Much more difficult than the middle the previous day, this race went in and out of a lot more low visibility areas. I had a pretty good race, with minimal time loss for the first 17 controls. Small misses at 5 and 12 were acceptable given the visibility. It was 18 and 19, back in the area we had been in the day before, where I lost the time. 18 was a stupid parallel error, running into the wrong depression out of the drinks point, and at some point between 18 and 19 I lost map contact. I failed to relocate in the circle spectacularly and went for a little wander. The 'white' forest was very variable, with patches of open, areas of bushes and almost invisible tracks. The contours became crucial and I did manage to relocate. As I ran into 19, Simonas was running out of it. As I said before, he missed 20 and we ran to 21 together. For some reason I decided to take a direct route and not go round the nice path and he got a little ahead, where he stayed until the finish.
Again a promising result but not what I was looking for. Having said that I took a lot of positives out of the day and it boosted my confidence both for the week and the season. I felt really strong in a good standard race for over 70mins. 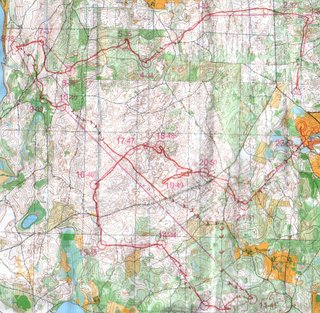