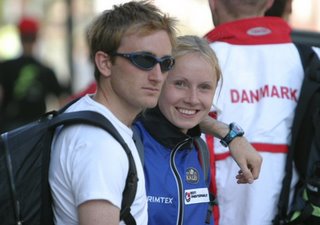 As soon as I got home from Lithuania, it was time to head off to Denmark for the final Great Britain team training camp. We spent a few days in Silkeborg, training mostly in the forests around there, and then we had a day in Aarhus, staying in the Radisson (to see if it was suitable to stay in during WOC - it's a tough life being in the British team and having to stay in these hideously expensive hotels). We took part in the Danish middle selection race, and we attempted to take part in the classic selection races too, but officious organisers wouldn't let us start early and so we had to rush off to catch our plane home after running the first half of the course.
I personally did some really good sprint training too. There are some very good sprint maps in the area, with a lot of different challenges. However, none of them are really that relevant to the forested WOC sprint that we are expecting.

So, home from Denmark, but it was only about 8 days before time to fly out to the World Champs itself. The most appealling option during those 8 days was just to stay at my parents house, chill out, do a little training but not too much (tapering for WOC - reduce length and number of training sessions but not intensity), and spend as much time as possible with Liis before not seeing her for a couple of weeks.

So in those 8 days I frankly didn't do very much. I went to Thorpe Park, which was nice (although ultimately a little disappointing as the main new attraction, Stealth, broke just as I was about to get on having queued for about an hour). I ran a couple of local orienteering races. I did some technique training on 1:5000 maps. I ran some interval sessions and a time trial. I also watched Surrey Cricket Club thrash Kent.

The most interesting day was probably Tuesday though. I started off by jogging first thing. Then I did a sprint training session on Esher Common, on a fantastic new 1:5000 map. I was just training on my own, with no controls or anything, and I planned myself a complicated session which I will descibe briefly.

I started by warming up well with a long jog from the car park. Then I did the first line course, trying to run as fast as possible while staying on the line (which proves very difficult sometimes). 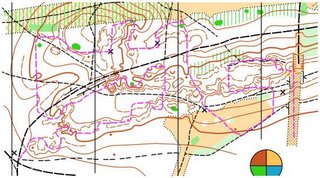 Then I ran a control flow exercise with lots of controls, lots of twists and turns, designed to maximise confusion and improve concentration and direction in and out of the controls.

Then it was another line at the other end of the area. 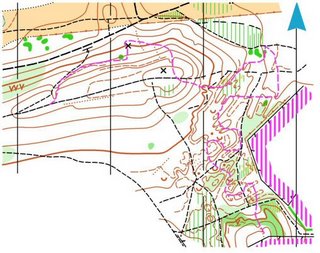 Followed by two short sprint races which I ran at maximal intensity. 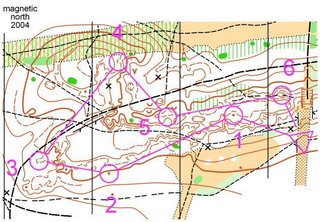 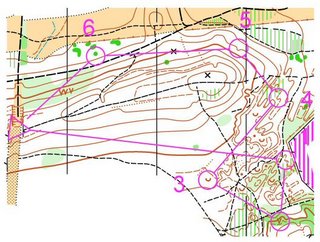 So I managed to get some really good training out of a very small area, and a lot of it very relevant to Denmark. Then I surveyed a school for an orienteering map, and started to draw it on OCAD as well, before my next training session which was a small training event organised by Croydon OC on Addington Hills. It took the form of a map memory exercise, where at each control you have to memorise the route to the next one. I have run on the area a number of times before, but it is perfect for this exercise with countless spurs and reentrants to confuse you.

I ran it pretty well, and was perfect except for 2 controls. I made a small mistake at 5 when I dropped into the wrong reentrant and had to relocate off the fence. But it was number 14 that threw me, and I must have spent around 10 minutes searching for it before conceding and heading back to the start for another look at the map. 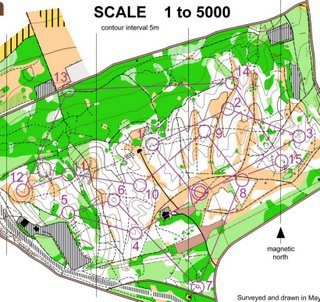 A really enjoyable session on what otherwise could be a limited area.

Yesterday was mostly spent packing and travelling. Our flight was delayed so we arrived at our hotel in Aarhus after midnight. With less than a week until WOC sprint, I won't be doing much training but I will try and get onto sprint maps a couple of times.

SLOW held a great event on the Esher map - Micr-O on the section you trained on and fast, flat orienteering on the rest of it. I think they are holding another Micr-O on it next month too.