I think that I can count myself as being probably the most unfortunate person at the World University Orienteering Champs last week in Slovakia. I went in with high hopes, and came out with average results and minus a shoe and a pair of trousers. I decided to sit out the long because I wanted to concentrate on the middle, sprint and relay, so I had a nice day in the sun cheering on the British team. It was especially exciting watching Helen Bridle run to her silver medal. 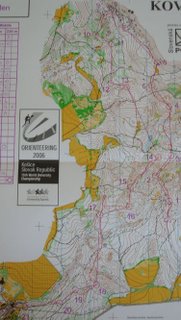 Then on Thursday it was time for the middle race. I felt really good before the race and in the warm up, but I didn't feel so good when I started. I had trouble getting into the map, and it seemed like all the first half of the course was uphill. I started to worry that my heart rate was too high too soon and maybe I was sick. Despite all this, I had a fairly good start to the race (not at the pace of the leaders, but OK). I made a couple of small mistakes in the rocky section, again nothing major, just a few seconds here and there, and I felt that I was running ok. But then, on the steep rocky descent to number 10, I felt my foot sliding around in my shoe, and eventually half of the sole came away. There had been no indication (as far as I could tell) that the shoe was in a bad condition, and it was a huge blow. My confidence in my footing was reduced to zero, and my concentration on the map fell to quite a low level. I wanted to finish the race as best I could, but looking back, I was orienteering really badly, concentrating more on where my foot would go next and not on the shape of the ground. 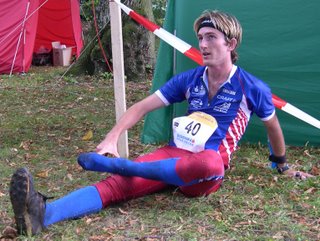 And so I started to make mistakes. Number 17 was the major one, losing track of my height on the slope. I misread a rootstock and looked for the control too high. Number 18 was far from perfect too. By this stage my shoe was really annoying as well as uncomfortable. Every step half the sole would flap forward and catch on branches, or just get under my foot. I missed 19 badly and at 20 I just ripped the shoe off and ran in my sock to the finish. I was not surprised to finish 5 minutes down, and I thought that my position would be lower than the 23rd i ended up with.
Results of the middle here 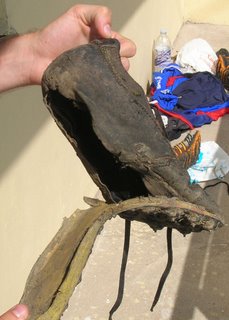 Then it was time for the one I felt I had my best chance in, the sprint race around the town of Kosice. I had a good late start time, and I felt fit. My confidence was very high after WOC and I knew a medal was a possiblity. The start was in an alley, and the first leg took you out of the alley into the main street in Kosice. The first control was close, and in sight of all the spectators. I ran out and was immediately confronted by loads of people. I had prepared for this, but it did not stop me being distracted. Sometimes maybe it is a little unfair to have a sprint race like this, timed to tenths of seconds where people can block your path, or obscure your view. This is no excuse for my mistake, but I was pushed wide by a crowd and I misread the map and ran to the wrong building. I quickly realised what I had done, but the damage was done and I had lost 25 seconds at the first control. I am very disappointed with this, as it cost me a chance to do really well, but I am really happy at the way I recovered from this early mistake. I then went on to have a really good race, with only one small route choice mistake (where I lost maybe 10 seconds). I picked out good routes, executed them well and had a good pace. Most of my splits are comparable with those of the medal winners. I finished in 12th place, 44 seconds behind the winner, and knowing that I had thrown away at least a top 6 finish right at the start. 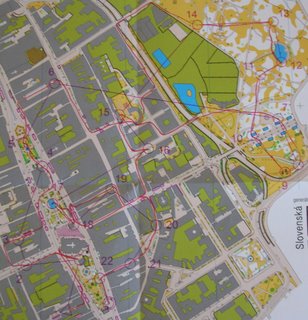 The fact that I recovered so well and had a good race though makes it easier, as does the fact that Murray made the podium - nice one Rocky :)
Results of the sprint here

The relay was meant to be a glorious end to the week with medals for the British boys and girls.

So we got it half right.

The girls were awesome and Helen Bridle ran a storming last leg to sweep past Norway, Finland ans Switzerland for the GOLD medal.

The boys did less well. I ran first and my race was mixed. I ran in the lead to start with, then I missed a control and dropped back into the pack. I managed to catch the leaders again through the spectator control and ran together with them at the start of the last loop. We had a long climb, and then some shorter legs around the top of the hill. I made two mistakes, trying to run too fast etc, and lost around 2 minutes to finish 7th, just under 2 minutes down. As I said earlier though, I also lost a pair of trousers. This occurred about 1/3 of the way round my race, and I ran approximately 25 minutes with my ass hanging out.

The other boys had mixed fortunes and we ended up 10th i think.

But then it was time to celebrate the girls success and prove to the other nations that not only can GB boys and girls orienteer, we can dance as well. At the banquet we caused a stir by dressing as the Spice Girls and the Village people, and performing awesome dance routines to the amazement of all (including ourselves). 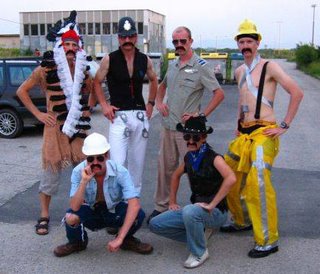 Can you tell which one is me?
World students website here

Are you the gay-looking one?

Those photos are class! You guys dominated the party! Good effort!

Glad you don't wear a G string to run in!