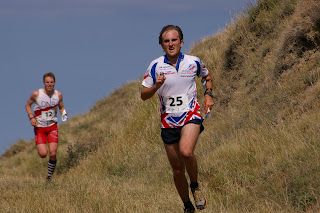 Better late than never! I travelled to New Zealand over Christmas and New Year to compete in the first World Cup races of 2013. They were held on the North Island, around Wellington and Hawke's Bay. I ran well (better than expected) to finish 13th and 19th in the 'forest' races, and 28th in the sprint (although I took it easy in a challenging final to protect my calf injury). A pleasing start to the year. I also took part in Sprint the Bay and some pre-oceania races with various levels of success.

I combined the racing with travelling around the North Island with my girlfriend, and I would say that in the 6 weeks we were there, we pretty much covered the whole island! We travelled round in a camper van, ran up a lot of mountains, ate a lot of good food, enjoyed the hospitality of the locals and generally enjoyed the climate and environment.

I would like to say thank you to Vårdlänken Bemanning och Rekrytering and Infanta Ribbåtar for supporting me financially on this trip.